This section presents the philosophy and important concepts of Computree.

The goal of Computree is to allow the processing of 3D points clouds, in order to extract useful information, as for example:

The platform is design in a Research and Development approach. The main idea is for the user to create interactively an algorithmic sequence allowing from loaded data, to obtain wished results. This sequence, or more accurately this hierarchical tree (it is possible to have parallel algorithmic ramifications), is decomposed in unit algorithmic steps, managing specific processing.

Steps are brought together in plugins, what allow to easily enrich the platform with new processing.

After execution of the algorithmic sequence, transitional results of each unit step are available, exportable and displayable. It allow a deep analysis of processing quality.

The platform has been developed with the following philosophy:

The goal is so to allow to separate teams to collaborate in 3D forest scenes processing.

But even if the platform allows a Research collaborative approach, it is also designed to permit an easy transition of developped methods in a production context (in forest management for example). Indeed, the system allows an easy implementation of dedicated interface for specific needs, using Computree core and plugin transparently.

The Computree platform is composed of following elements:

Structure for data management and processing¶

In order to process data, Computree use a step tree, exportable as a script (.xsct2 extension). The root of the step tree is a loading or a data creation step. After that, each step is attached to a mother step. The step tree can be completely constructed before execution (allowing batch or delayed processing).

Steps are implemented in (independent) plugins. Each step take as input the results of its mother step, and generate other results as output.

These elements are of two different kind: 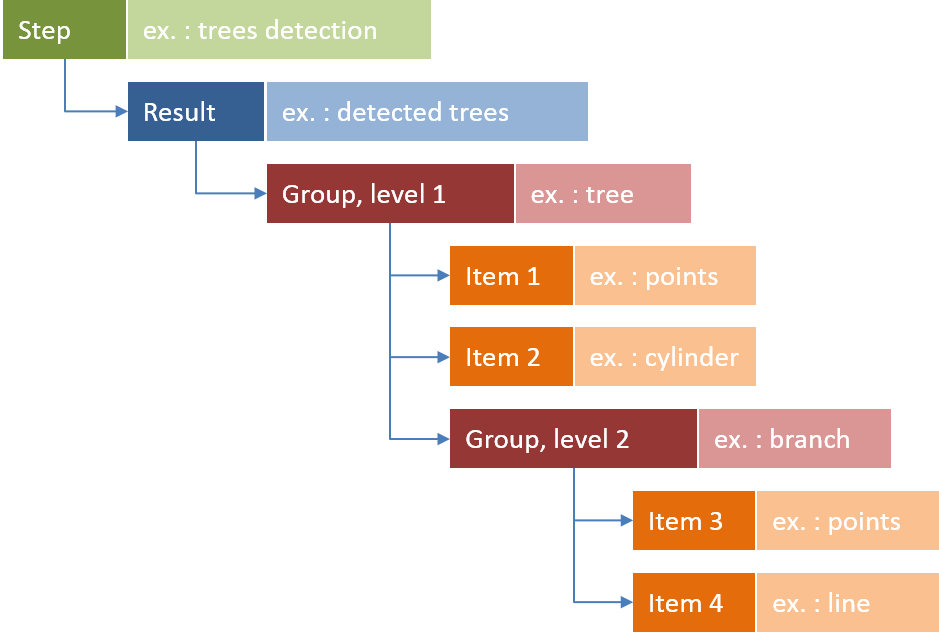 On this diagram, a result structure in represented, showing the structuring by groups, and data storage in items hosted in these groups. It should be noted that for each group level, the step can produce an undetermined number of instance for this structure. So if the algorithm has found n (forest) trees, the structure would be created n times, containing each time differents points and cylinders, and also a variable number of branches for each tree.

In order for the step tree to be completely created before execution, it is necessary for the steps to communicate together, to determine their compatibility.

To do that, each step has its own OUT result model describing its structure:

These models are named “OUT”, because they describe the structure of output results of the step.

The models are named IN, because they describe structure needed as input by the step. 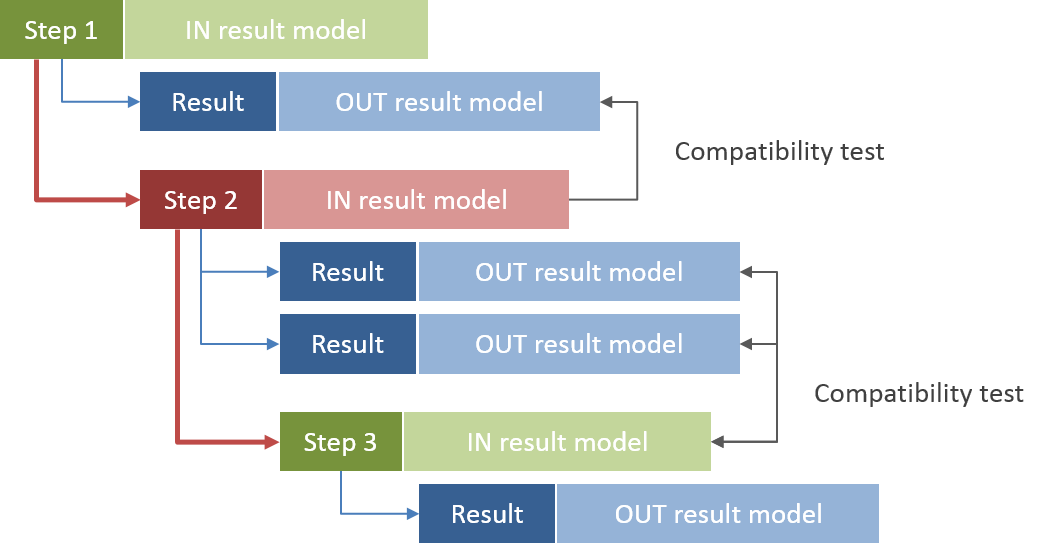 On this diagram, steps 1 and 3 come from one plugin, whereas step 2 comes from another one. Red arrows show the succession of steps. Blue arrows shows the creation of results by the step. Black arrows represent the compatibility testing done by one step, thanks to its in results models, compared to out results models of previous step results, candidate as input.